“This isn’t a project about how there used to be green fields here and now there’s a great, ugly big motorway.”

The photographs instead document the relationship of living in the countryside next to the noise of the ‘concrete waterfall’ – a term coined after a friend said to imagine the sound of the motorway was coming from a waterfall.

Much of the relationship of living near a motorway is about the sound – you can hear the ebbs and flows of the traffic but you rarely see anything as you explore your surroundings. The photographs aim to visualise this relationship through chance encounters with the parts of the motorway that are visible, glimpses of colour or movement through the trees and strange sculptures on the landscape. 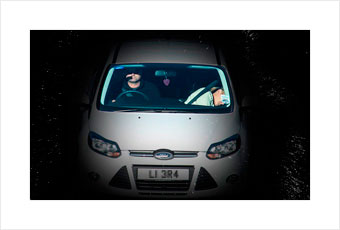