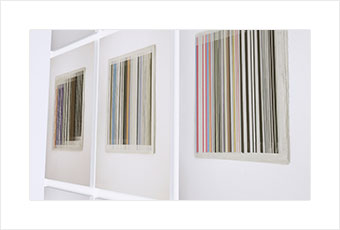 It is now considered we only have an 8 second attention span. At the same time we are bombarded with more and more information, news reports and continuous updates. News is crudely converted and summarized with apps such as ‘summly’ or retweeted in less than 140 characters.

This work crudely converts the idea of 8 seconds into 8 pixels – digitally converting the 8 pixels of the cover of newspapers back into full page images. This 8 second scan of information re-manipulated back into the cover creates a intriguing barcode effect reinforcing the way in which we robotically process this information.

The final images are grouped together like newspaper stands at petrol forecourts and mounted onto a physical stone like structure. Putting the concept of continuous information and our utterly brief consumption of it back into a permanent physical resting place, questions and cements its place in our social evolution.

The question is – what are we actually understanding from so much news? With most of it so repetitive, what positive difference is it making to the meaning of our lives?

This work followed a period of six months in 2013 where George didn’t read, listen or watch news in any form.

The newspapers featured are all taken from the 1st April 2014, a time where a ‘joke’ news item is often featured to coincide with fools day.